Traverse of the Matterhorn

Last weekend I travelled out to Italy with my good friend and regular Alpine partner Alec. We had both wanted to climb the Matterhorn for some time but on previous visits had never found it in condition. The mountain is most often climbed via the Hornli ridge from Zermatt in Switzerland but is deemed out of condition if there is snow on the lower sections. It is very long (1200m) and gives sustained climbing/scrambling to its 4478m summit and so requires good conditions. This time we decided to climb it from the Italian side via the Lion Ridge (aka The Italian Ridge).
We arrived in Cervinia on Sunday afternoon with a forecast of 3 days of good weather and decided to acclimatise on the route itself rather than lose the weather window. We walked up to the Abruzzi Hut that evening at 2800m only to find that it was closed for refurbishment. Normally huts have winter rooms that are left unlocked with a stock of blankets for use out of the main season but this one did not. We improvised and slept in a half finished open fronted building on wooden planks. We had not carried bivvy kit so had no sleeping bags, mats etc and so had a pretty chilly character building night!
The next morning the early arrival of the builders saw us scurrying away and up towards the Carrel Hut at 3829 m on the Italian Ridge. The route up was out of condition without the usual snowfield on the Tete de Lion and we had to endure some horrible grade 2 scrambling on steep ground where every hold was loose. We had no choice but to solo up it as the rock was too crap for anchors, we moved carefully and were glad to reach the Col de Lion. From here we joined the Italian Ridge and the rock improved as we got higher and pulled our way up the first of the fixed ropes. 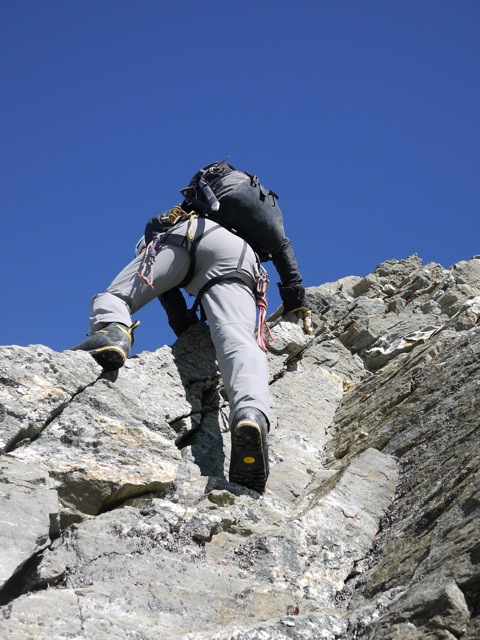 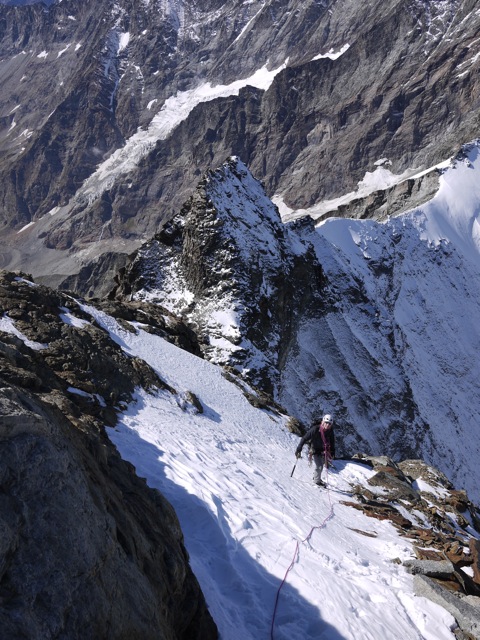 We had the hut to ourselves and enjoyed an afternoon of sunbathing and a good nights sleep under several blankets! 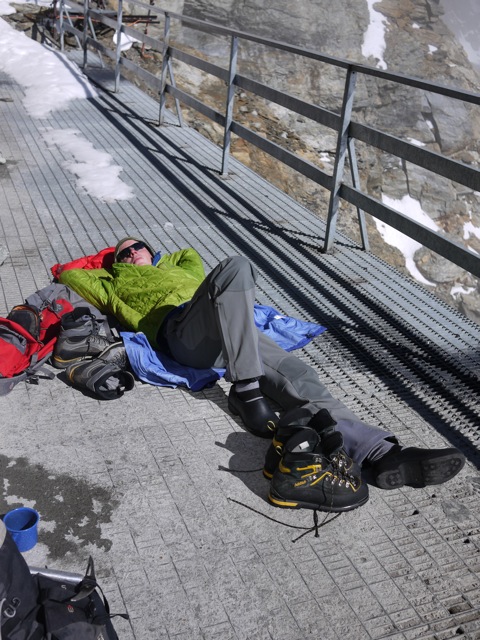 The route is a rock route and there is little to be gained from an early start so we waited for the sun to rise and set off at about 8:00am for our summit day. It was well below freezing and there was verglass on the rocks so we spent the entire day in crampons. The ridge gives over 650m of climbing with fixed ropes on the steeper sections. We headed up the Great Tower (about Hard Severe if climbed free but we used the fixed ropes!), across the famous toe traverse of the Mauvais Pas, up the Linceul icefield and onto Pic Tyndall (4241m) for a mid morning cereal bar. 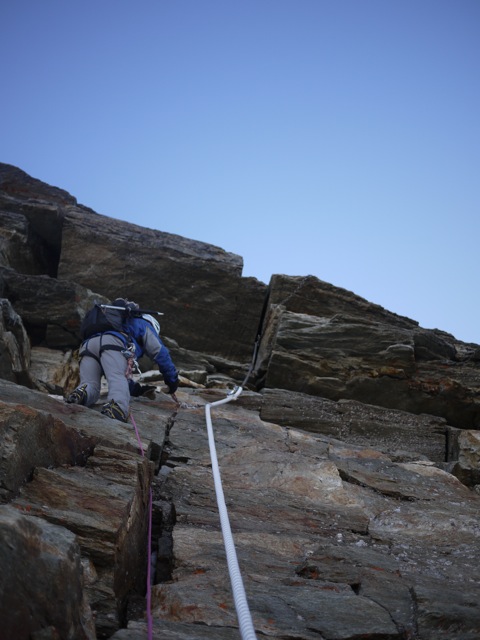 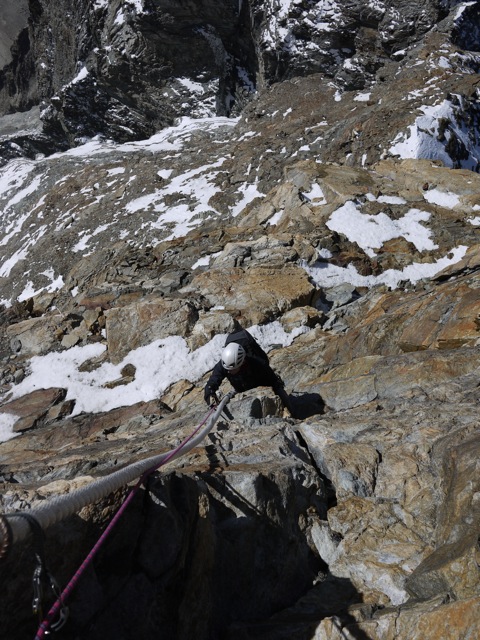 We reached the summit at lunchtime and were pleased to only be about 15 minutes off the guidebook time with our limited acclimatisation. We had also not seen anyone else all day which was a real bonus on the Matterhorn! 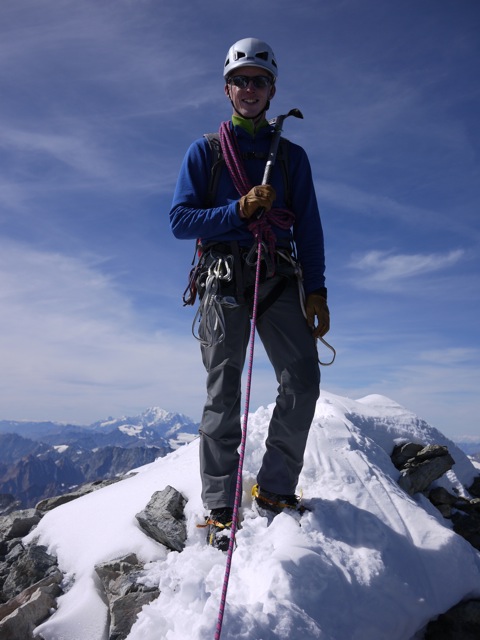 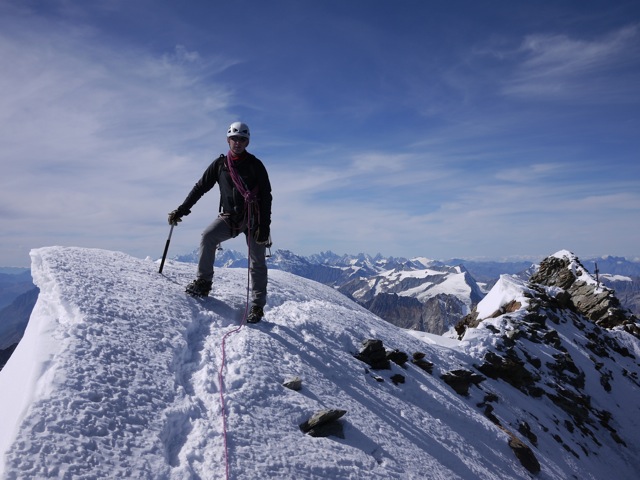 A beautiful slender snow ridge links the Italian and Swiss summits and we followed it to pose on both summits and look down into Zermatt below. We had decided that a traverse of the mountain would be very aesthetic and so descended the Hornli Ridge. This was much more shaded than the Italian Ridge and so was plastered in snow for most of its 1200m to the Hornli Hut. The guidebook suggests a descent time of 6 hours or more and the continuous down climbing, occasional abseiling and tricky route finding was knackering! We were a bit slower than the guidebook suggested and enjoyed the final section in the light of the full moon. A Swiss team passed us half way down but took a different route to us lower down and so we were lucky to pip them to the hut and get the last two beds in the winter room, albeit without blankets again! 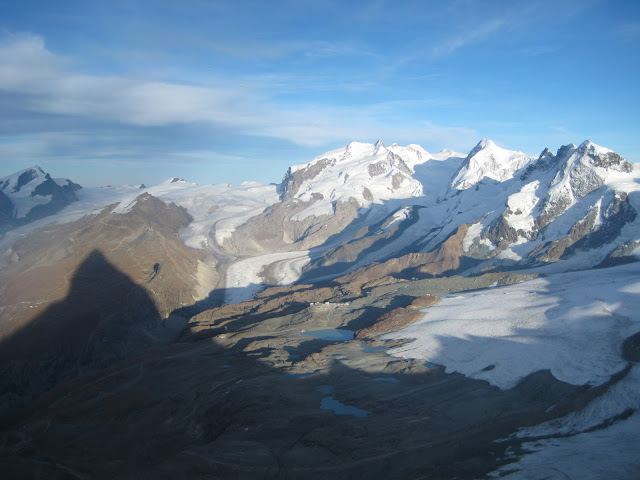 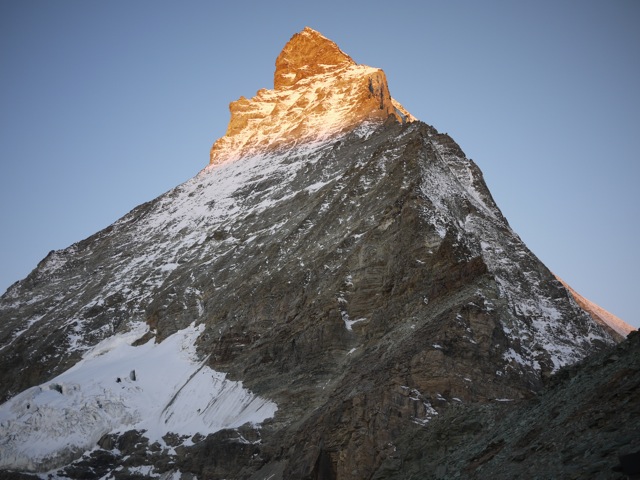 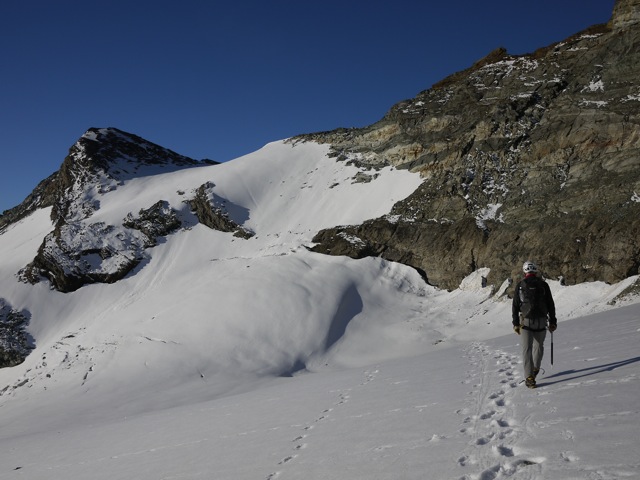 The following morning we headed across the Furgenn glacier and over the Breuiljoch to descend back into Italy for a well earned pizza and pint! With a poor forecast for the rest of the week we got back in the car and drove home. The rest of the trip photos can be see here: http://gallery.me.com/expeditionguide1#101195

Great description and pics. You were lucky, no one on the mountain. Great timing with the weather in what was a unsettled Alpine summer!
Cheers
Gary

We were very lucky, especially as the day we left the heavens opened and it was plastered in snow down to 2000m again!