These two routes have been on my ticklist for some time now but for whatever reason I have not got round to doing them - until this weekend.
This is the first weekend that I have had free for a long time with a good weather forecast so some frantic ringing around to get a climbing partner sorted saw Simon arranging cover at work and squaring it with the wife to join me for a raid to the Wye Valley on Saturday afternoon and then the Llanberis Pass on Sunday afternoon.
King Kong - HVS 5b? - 3 pitches
A couple of years ago this route had a fairly major rockfall and the guidebook grade has not been re-assessed since. Their is therefore some debate as to what grade it is now with internet speculation ranging from HVS 5b to E2 5c! It was pretty warm when we geared up at the foot of the route on Saturday but within about 8 metres of climbing I had sweated buckets - and I am not a sweaty person! The start is very physical and does not ease you into the route in any way whatsoever. You climb up under a roof, traverse below it and then pull up through/past it into a groove. That bit is fine. The groove is then reasonably sustained and I found it the most difficult bit of the climb before stepping out into a cave for a breather. The rest of the 1st pitch is pleasant but not in any way hard.
The second pitch has another roof on it and it took me a couple of minutes to figure out the sequence through it. I will not tell you what that is but needless to say feet are the key. Once solved the sequence was not hard but it is intimidating when you are looking up at it. The rest of the route was then pretty smooth.
Cemetry Gates - E1 5b, two pitches, Dinas Cromlech, Llanberis Pass
I had climbed Cenotaph Corner in April and so was looking forward to how this compared but in actual fact spent more time comparing it to King Kong to try and ascertain the grade of the Wye Valley classic. The approach to Cemetry Gates is fun involving an exposed scramble from the foot of Cenotaph corner and and squeeze down a chimney to the belay ledge. There were two folks ahead of us on the route so we had to sit and wait with fingers getting increasingly cold in the overcast weather. A fim crew had turned up that morning to film someone on Right Wall but it had been deemed too wet. Nevertheless we were surrounded by rockstars with folk climbing the Corner, Left Wall and Resurrection. 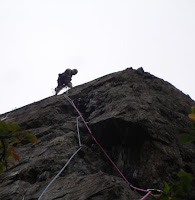 On belay at the top of the first pitch of Cemetry Gates.

As I started climbing it started drizzling but the route remained pretty much dry and it did not come to much. The first pitch is the 5b pitch and it is sustained but all of the holds are their. There was no single part of the climb that had me stumped, holds appeared where you wanted them and gear was plentiful. I took my time and rested as much as I could and enjoyed it. The last few moves to the belay ledge are pumpy and the world slowed down a bit as I made them but it went without drama!
The second pitch is 4c and is very pleasant taking you to the beautiful grass garden that is the belay ledge at the top of the Gates, Right Wall and Cenotaph Corner. It feels like a hallowed place to be and the abseil off is spectacular. 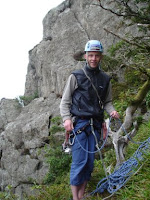 At the top of Cemetry Gates - buzzing!
So back to King Kong. What grade is it? The crux moves felt physically harder than anything on Cemetry Gates but it was less sustained. The majority of the first pitch after the crux is straightforward Severe. That said if you were an HVS climber I think King Kong would feel on the limit and hence the 5b grade. I would say its now a tough HVS 5b or lower end E1 5b. But then what do I know!
Rob