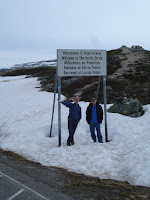 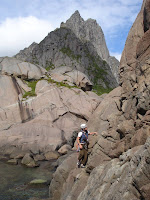 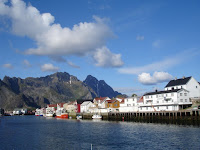 A few years ago I bought a Colin Prior poster entitled “Midnight Sun”. It showed steep sided granite mountains bathed in sunlight – at midnight! The small text at the bottom said that it was taken in the Lofoten Islands, Norway. I had never heard of them but decided I had to go.

Having talked about it often enough I decided 2007 was the year. The guidebook recommended June as being a warm, dry month (relatively speaking) and so some willing friends were found to enjoy a climbing trip in 24 hour daylight 150 miles north of the Arctic circle off the West coast of Norway. The photos that I had seen showed beautiful granite mountains rising dramatically out of the sea, long multi pitch rock climbs, scrambling along knife edge ridges and golden sandy beaches.

I put the time in my diary and booked flights to Oslo. Folks that had been before were divided on the best way to get their but we decided to drive from Oslo in a hire car. This was the cheapest option and flights would have been spread over 2 days so in theory would not take any longer than flying.

Car hire desks are always a nightmare inevitably having long queues of people moaning in several different languages and hassled staff remarkably similar to the Little Britain travel agent. Oslos Budget desk was refreshingly different and we were greeted with friendly laughter when 4 blokes with excess luggage arrived to collect the budget Suzuki hire car. 4 beers saw an upgrade to a Nissan Almera which meant that climbing ropes did not have to be used to secure bags to the roof of the car after all.

We left Oslo at lunchtime to catch the ferry from Bodo, about 1500km away, by 3:00PM the next day. Some swift driving on roads that we were surprised to find had absolutely no motorway or dual carriageway and very little sleep meant that we made it with a couple of hours to spare.

I had unwittingly booked us onto a Cruise ship across to Lofoten which doubles as an expensive car ferry. This costs about £50 each more than the humble ferry but did mean that we enjoyed a fine 3 course meal in the ships dining room! The German couple that I was sat with over dinner, we all got split up to minimise impact I think, were celebrating their 40th wedding anniversary and I like to think that my t shirt and trainers helped them relax a little in their fine dinner outfits.

We arrived on Lofoten to blue skies and sunshine, the last week had seen heady temperatures of 20c and 24 hour sunshine. We found a free campsite at Kalle, about 20 minutes drive from Svolvaer towards Henningsvaer. The campsite offered water and a compost toilet as well as a sandy beach and stunning views that lived up to the photos that had inspired me. Our backdrop was the imposing summit of Vagakallen (943m) which has no easy route to the summit and some of the best medium grade Alpine rock routes on the Island. My tent door looked out onto a sparkling ocean across an almost tropical beach and there was granite bouldering all around us.

Monday morning brought heavy rain so we spent the day exploring the local area. Henningsvaer is the centre of climbing on Lofoten. There is a climbing school and café with a new routes book and small gear shop. They have a plentiful supply of the guidebook if you could not get one in the UK – “Climbing in the Magic Islands” by Ed Webster. Food shopping was done at a CO-OP in Svolvaer and as a general rule most things were twice the price of the UK except booze, which was about four times the price. We used our duty free allowance at the airport to buy two crates of beer at near UK prices that lasted us the first wet day.

We then had 3 beautiful sunny days and enjoyed some fine climbing on perfect granite. Our campsite was a 10 minute walk from the sea cliffs of Paradise. This area gets a mention in the guidebook but local climbers want to keep the routes un-recorded to maintain a spirit of adventure. You just turn up spot a line and climb it! We did routes from about VS 4b through to E2 5c. They were all single pitch and mainly crack climbing, some on the sea cliffs and some slightly set back from the sea. None were tidal and all could be walked into rather than needing an abseil. We also found a route at the campsite that Rockfax gave E1 5c and proved to be a brutal fist jam up a curving crack.

Me climbing at Paradise.

Paradise gives a good introduction to the style of climbing and is easy to get to which is why we chose it for a first day. With hindsight I would recommend jumping straight onto the longer mountain routes that the Island is famous for if the rock is dry and the weather good. It soon changes as we were to find out! Save Paradise for evening cragging or easy days resting.

We spent a day around the Heningsvaer area and climbed Gandalf, Norwegian grade 5, (about VS4c) a 3 pitch crack and face climb that climbs the right hand side of the cliff known as Gandalfveggen. The first pitch is the crux and is very typical of the climbing that we did on the Island. The route involves laybacking and jamming up a variety of different sized cracks from finger cracks to full hand jams. The second belay is quite small but there is good gear throughout. That afternoon we managed a swim in the sea – not bad for the Arctic!

The next day saw us heading for the Goat. This is a pinnacle of rock that sits above the town of Svolvaer and is in all the tourist brochures and on the front cover of the guidebook. We were expecting something good! We chose the 1910 route, which is 3 pitches and graded at HS 4a. It was very cold and windy and we topped out in heavy snow. Recent rockfall meant that the route was harder, probably about VS4c. The start of the second pitch was on chossy rock that was loose and horrible but does give a fantastically exposed traverse out over a big drop. There is a bolted abseil descent and we were glad to get back down and thaw the hands and feet. Hot aches in June! In good weather the route Forsida looks good with 5 pitches at about HVS 5a.

On Thursday we headed back to Heningsvaer and climbed Applecake Arete, a 2 pitch HVS 5a, Light & Shadow another 2 pitch route at the same grade and Piano Handlers Route, a 4 pitch Hard Severe. The latter route is described as being an extremely poular beginners outing and it was often teeming with people from the nearby climbing school. We climbed it late in the evening and had the route to ourselves and it was very enjoyable. All of the climbs are trad and the climbing tends to be crack climbing with lots of smearing for feet. Consequently the climbs we did in the rain felt nails! If you want to train for a trip then get on some Peak grit and practise jamming, if you are a lightweight like me then practise laybacking as well! All of these climbs were roadside and had good gear. Cams are really useful, take a full set and double up on the mid sizes. We managed to place number 4 cams on most routes upto E2.

The rest of the 2 week trip was wet. I learnt how to play Stop the Bus & Nomination Whist, dreamed of owning a camper van, moaned about the price of beer and sat in the climbers café – a lot. I also managed to squeeze in a day climbing Vagakallen despite the guidebook telling me in CAPITAL LETTERS – DO NOT ATTEMPT THE CLIMB IN BAD WEATHER. The easiest route was a grade 2 scramble and the others were not keen on a day in the rain so I went solo and had the whole mountain to myself all day. The route finding was a lot easier than the guidebook suggests and the difficulties would not be an issue to anyone happy on Grade 2 scrambles in the UK. The first ascent team went from the sea near Kalle so I decided to try and find a way back down that way. I descended to about 100 m above sea level to find steep cliffs dropping into the sea, which resulted in hacking back up hill Indiana Jones style through trees and bushes to get back to a col at 550m. I was knackered by the time I did get back but had not seen another soul all day and barely seen a path. Old school!

Saturday and Sunday night were spent out on the town. The bowling and the swimming pool were both closed at the weekends so it was off to the cinema. The combination of a dark room that was warm and dry seemed the ultimate in luxury so we blew the budget and saw films both nights!

We also managed to sneak in some more climbs on Gandalfveggan, all 3 pitch routes from VS to HVS between showers and sometimes climbing in the rain.

On our last day I managed to persuade the others that the heavy rain was only a bit of sea mist that would soon lift and we walked into Only Blueberries on Pillaren. This was one heck of walk in, hacking though dense trees up hill in the rain. Needless to say the sea mist did not lift and we did not fancy slab climbing in the rain but the route looked great and I would recommend it to anyone on a dry day – 6 pitches at about VS on a friendly angled slab.

On the journey home we caught the car ferry which goes from Svolvaer to Skutvik, a couple of hours drive North of Bodo but much cheaper than the cruise ship at about £10 each. 18 hours of driving saw us in Oslo where we stayed with friends of Rich in a luxury Penthouse apartment in the city centre. The contrast was incredible. We had gone from cooking over an open fire on the beach without washing for a fortnight to luxury city centre living. We enjoyed a fantastic meal and then 3 minutes walk took us to an open air concert with Mel C and Natasha Beddingfield amongst the line up. We survived a minor altercation with the law for drinking and dancing in the streets and flew home the following day.

I had high expectations and the island did not disappoint. In all we managed 6 days out on the hill, which is not bad in a 2-week expedition rock climbing in the Arctic. At times the weather was frustrating but if you go expecting to spend a lot of time waiting then you will be fine. We hoped to climb at night if it was wet during the day but unfortunately it stayed wet at night too.

I will definitely go back but would look at loading a car with food and booze and catching the ferry from Hull to Bergen and then driving from their. You can hop aboard the cruise ship at Trondheim and that would limit the driving.

Before I went I emailed a friend of mine, Twid Turner, who had put a new route on Vagakellen with his partner Louise a couple of years ago. I asked him for advice and ideas and his response was “take plenty of booze”. I should have listened!
You can view my photos at http://www.expeditionguide.com/gallery